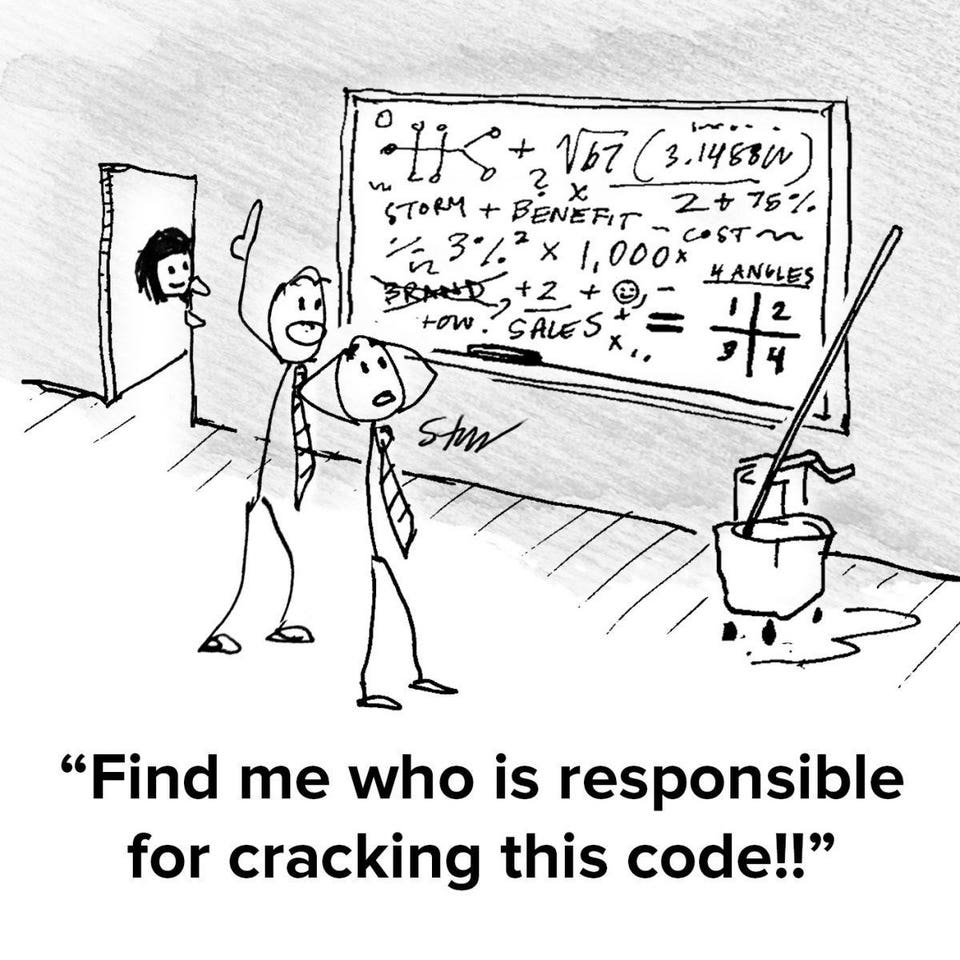 No, no, no. If you’re struggling with your business these aren’t solutions, they are band aids that are failing to solve a singular, much larger problem. There is something else that is fundamentally flawed in your business, something that nobody else is talking about, and all the branding and social media in the world aren’t going to do anything for your business unless you fix this first.

But you’re in luck because I figured it out!

First, let me tell you how you got to where you are right now.

It’s common to cut your teeth in the corporate world before going out on your own as a consultant or service provider. This is where most entrepreneurs lay the groundwork, learn the skills, make the contacts, and crunch the numbers to start plotting their own course.

Once they see there’s a viable chance for them to branch out on their own, they take everything they learned at that big corporate job and apply it to their burgeoning business. In many cases, entrepreneurs make the fatal mistake of trying to create a cheaper version of the company they just left.

And here’s where your first mistake, unbeknownst to you, begins.

This mistake is one of many in what I call the “default model.” So many entrepreneurs (including many of my own clients) transition from employee to self-employed by trying to duplicate what they learned in the big business world.

Spoiler alert: Doing business this way doesn’t really work for the self-employed camp. The default model is brimming with pitfalls and traps disguised as logic that typically result in one of two outcomes: you’re either not as profitable in your new venture as you planned OR you spend way too much time working and never achieve the time freedom or creativity you had envisioned.

Here’s why it will never work and what you should be doing instead:

Finding Fault with the Default Model

One of my clients (we’ll call her Jane) was telling me how she got started in her current business after leaving behind the corporate world, and it fit the default model to a T:

She’s a freelance marketer, and she worked for a digital marketing agency before transitioning to self-employment. She started looking at the numbers the company she was working for had been upcharging for her work and compared it to how little she was getting paid. She thought, “I could charge half of that and still make way more than I would here—cool!”

Jane ran the numbers and got excited because she saw an opportunity to make way more, not have to answer to a boss, have complete creative control over her work, AND get to work from home or wherever she wanted. To Jane, this was a dream, and she took it and ran with it—right into a wall (figuratively speaking, of course).

Once she landed her first client, Jane was trying to do the same job she was doing in her corporate gig and essentially be that same company—only cheaper.

Now, this in itself isn’t inherently bad or wrong, but here’s what happens: You bring all the processes and habits from that old job into your little itty bitty micro company and think things are going to work the same way, but they’re NOT.

Jane found this out quickly. She encountered expenses she hadn’t budgeted for (which means she also didn’t charge for them), plus she found she was spending a ton of TIME going back and forth with the client—something she didn’t do much of while working for someone else.

This is why every entrepreneur I encounter is struggling to just stay afloat with clients and work. They are habituated into working in this default model of business, and it’s not doing anyone any favors.

The default model will probably sound very familiar to you. A few key ingredients are:

These don’t sound that bad, do they? I mean, the behemoth companies that are raking in millions of dollars operate like this, so the model must work, right?

Let me point out the obvious: It works for them because they are operating a different kind of company at a completely different scale.

This model does NOT work for the solopreneur, micro-agency, or small creative service business owner. This model is not set up to profit when you are a small business. You have different time constraints, different access to resources, different clientele with different budget needs.

And this is why the default model is killing your business.

Price Is More Than Cost of Goods

To be clear, there is major value in using your old job as a foundation. You can certainly take what you learned on someone else’s dime and apply it to building something of your own. To look at it another way, you were getting paid for hands-on experience. Most people learn how business works by working at large companies, so they take what they learn and apply it when they go out on their own.

This is how EVERYONE operates their business, and it really does make sense.

But what most people overlook is that the operations aspect of your old job fit that company of that size. A business with just one or two people will function differently because you don’t have the time, resources, or human capital of a larger company.

For example, huge branding agencies spend loads of money upfront to pitch clients. They will put entire teams on a pitch for months to build a creative pitch to potentially land a big whale like Pepsi. They do a ton of free work in hopes that they land the client, but this is built into their model.

Naturally, they don’t always land the client, but when they do, that client essentially pays for ALL the other lost pitches as well. In other words when their humongous clients pay them millions of dollars, those dollars are not just paying for their project. They are paying for the agency to exist, for the agency to pitch, and even to lose other clients. It’s all built into the price.

And that’s why so many entrepreneurs struggle with being as successful as they set out to be.

Embrace the Chance to Shape Your Own Model

Following the default model is like when your mom used to ask you, “If your best friend jumped off a bridge, would you do it too?” It’s like we’re somehow programmed to do what we see everyone else doing. We’re even more inclined to repeat their processes when we think they’re successful.

This is an antiquated model left over from a time before the internet leveled the playing field and made it easy for one person with a laptop to offer services to a company across the world with almost no barriers. This wasn’t the case 20 years ago when you needed a whole company with lots of different departments just to keep the lights on because everything had to be done by hand.

We’re in a new age where this default model for small service businesses needs to be put to bed. There’s a new way to do things, a way that cuts out all the junk, politics, and corporate nonsense.

Embrace the chance to shape your own model that ensures you aren’t stuck playing out these old habits that are keeping you in the red, and instead are running a tight ship that was designed for the modern era, one that gives you profit and freedom.

Take it from a know-it-all: If you want to learn all the aspects of the default model that are killing your business and, and what a profitable model for a small service business looks like, join me live on September 19th for some amazing training, learning, and doing.